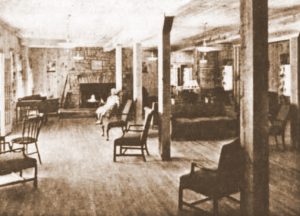 Transylvania County has always been somewhat of an insider’s secret, because of its rugged mountains, non-navigable rivers, and few roads.  Until the early 1800s, there were only three or four roads into Transylvania County.  One ran from Greenville over Jones Gap to Dunns Rock, passing the land that would become Sherwood Forest.  Major livestock drives began coming along the French Broad Turnpike, following much the same route as today’s U.S. 276.

In 1925, the Judson Mills textile factory in Greenville, S.C. acquired several tracts of land to create an employee recreation area for workers.  Mill Creek was dammed to create Trout Lake.  But the Great Depression caused Judson to sell the property in 1930, and a large inn was built by the subsequent owners on the shores of the lake.  The Robin Hood Inn boasted 20 guest rooms, a porch overlooking the lake, and an imported French chef.  Dinner was announced by a bugler in a Robin Hood costume.  After gaining popularity over the first ten months, the inn was destroyed by fire.  The Inn was never rebuilt, but the Robin Hood logo and theme stuck. 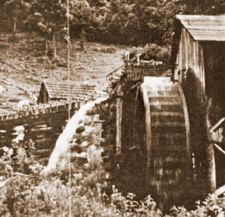 The land itself inspired the dreams of Arthur and Betty Kay Dehon, who came here from Florida in 1959, ultimately purchasing 1,000 acres to create a closely-knit community of people who shared common values and interests.  They believed that people can find peace and enjoyment “within the living forest.”  They strove to achieve balance between a natural environment and human development.  The Dehons discovered that their lifelong membership in the Audubon Society formed a link to a large group of people who loved not just birds, but the natural world.  Many early residents came here in response to ads in the Audubon Magazine.

Four more lakes were added in the 1960s, as Sherwood Forest slowly added homes, and the Dehon’s advertisements invited skilled crafts people to join the colony of naturalists and artists.  A retail craft shop was operated from the building which is today the Pro Shop.  A stage and lighting were added to the barn, which became home to the Brevard Little Theater for a time.  The golf course was added in 1967.  Milk, ice cream, eggs, butter, bacon and orange juice were delivered to cottages and homes all year by Biltmore Dairy. 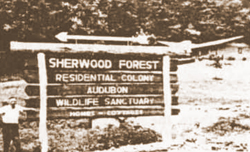 In 1990, ownership of the community’s common areas and amenities passed to the Sherwood Forest Homeowners Association (SFHA), which continues to manage the development today.  Though much has changed, much remains the same.  The community’s commitment to environmental stewardship and voluntarism remain firm; our joy and wonder at the beauty of the natural world are boundless.