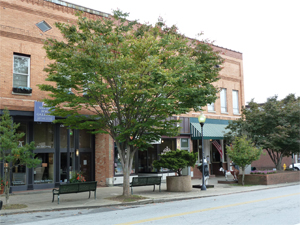 About thirty minutes from Sherwood Forest is the charming village of Flat Rock established in 1807 primarily by Charlestonians desirous of a way to escape from those relentless summers.

Playwrights and poets, in particular, seem drawn here. Carl Sandburg spent his prolific final twenty two years at his beloved Connemara, which has been restored and furnished as it might have been then. The home, the acreage and his wife’s goat herd are all now Historic properties. The Flat Rock Playhouse, North Carolina’s State Theatre, houses a nationally known professional performing company presenting works which run the gamut of genres. Theatre classes are also available.  The little village area has several remarkable shops and eateries. 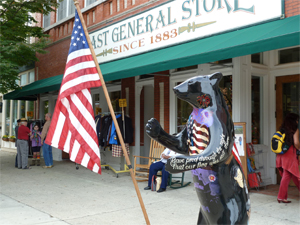 Nearby Hendersonville has a pedestrian friendly Main Street lined with many restaurants, brew pubs, shops, antique and art galleries. It’s a convenient and stimulating way to spend some time exploring the possibilities. Festivities include the Garden Jubilee Festival in May and NC Apple Festival in September. Enjoy the Music On Main Street concert series held every Friday from 7 – 9 pm. It runs June through mid-August and admission is free.