The land itself, 1000 acres, ancient and heavily wooded, is held as if in cupped palms between the high ridges and mountains that surround it and mark its borders.  Like those who preceded us, we find that this land is nurturing and protective, and we in turn want to protect it—to live within its silences and its mysteries, to be soothed by the creeks and streams that descend its slopes. We ascribe to what Thoreau so famously said, “In wilderness is the preservation of the world.” 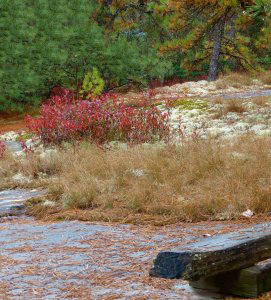 A 2009 ecological study identified 26 species of rare and watch-list species of plants and animals within our borders. This relatively small area contains seven state-listed rare natural communities, and is ranked “Regionally Significant” by the NC Natural Heritage Program.

Equally important is the position of Sherwood Forest relative to other conserved and protected lands. It connects a chain of more than 300,000 acres—from Dupont State Forest to Jones Gap State Natural Area, and beyond that, to the Greenville (SC) Watershed, Table Rock State Park, and the Jocassee Wildlife Management Area and Gorges State Park. Maintaining wildlife corridors such as this is vital to the survival of indigenous animals such as deer, fox, bears, coyotes and bobcats.